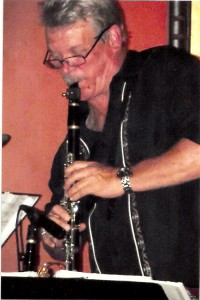 James Gentry grew up in Indianapolis Indiana where he attended High School. While in High School James studied Classical Clarinet with Achille Rossi of the Indianapolis Symphony orchestra. His interest at this early stage of his career was and still is in Classical Music. James went on to play with many of the All-City and All-state Orchestras.

After his graduation from High School, his interest in jazz began to blossom. James went on to attend Berklee College of Music in Boston Ma. Where he was a Performance Major and earned his four year professional performance certificate. Studying all aspects of Jazz Composition- Arranging- Performance. He studied Clarinet with Andre Lizotte ( Principle Clarinetist with the Boston Opera Co.) Improvisational techniques for Tenor Saxophone and Flute with Joe Viola ( Woody Herman). Composition with James Williams ( Art Blakey and the Jazz Messengers) Paul Schmiling who is the Dean of Composition at Berklee College of Music and Pianist of the Late Great Sarah Vaughn. And Herb Promeroy Arranging.

After Graduation from Berklee James continued to freelance in and around the Boston area before moving to California in 1979 where he continues to freelance and leads many Clarinet Madness bands including ” Benny Goodman Tribute Band.”